As we’re getting closer and closer to The Heart of Stone release in March, I thought that this week I’d focus on its incredible cover. Instead of me crowing about how good it is, and how the concept was created, I thought I’d get the real life cover designer on the Fiction Factory to talk about it, and tell us more about himself in the process. That’s right, today we’re talking to the award-winning Shawn King.
Funnily, Shawn and I have never met, and only know each other through Facebook groups and email. I saw the covers that he’d created for Michael McClung’s books after the SPFBO, and also the work he’d done for Ragnarok and Tim Marquitz. I knew he was perfect for The Heart of Stone, and the gritty nature I wanted in my book cover. Shawn was great to work with, and within two emails and two weeks’ work, he nailed the cover. Anyway, enough from me, let’s hear from him. Ladies and gentlemen, boys and girls, species of alien origin, allow me to introduce Mr Shawn T. King. 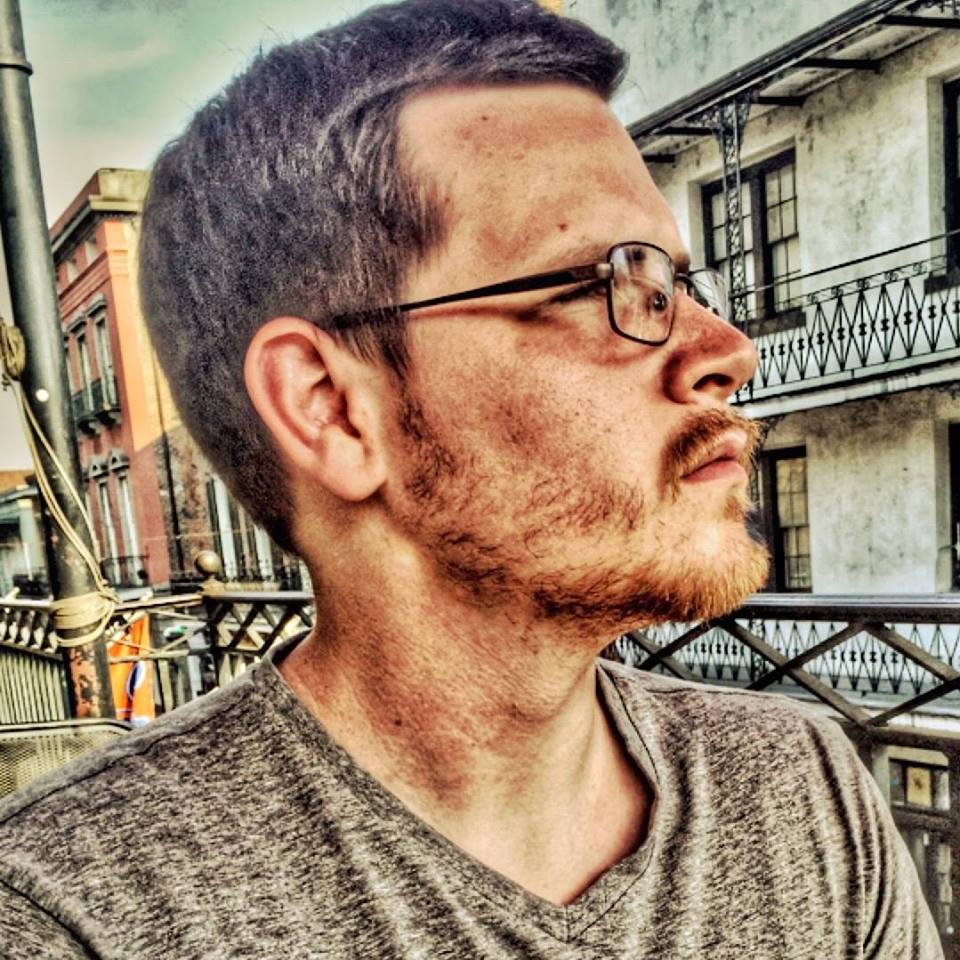 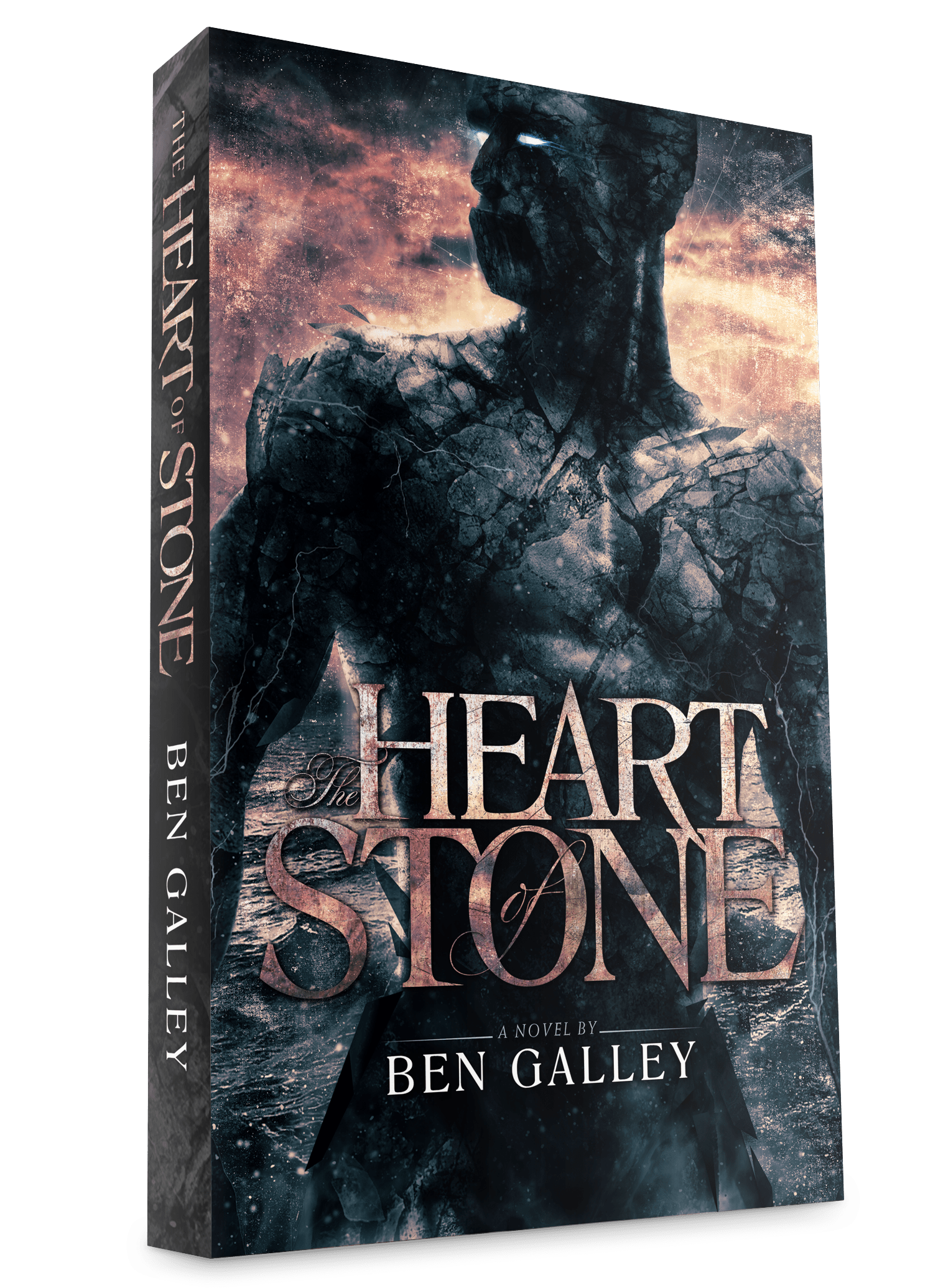 4) What’s been the best project you’ve worked on to date, or the one you’re most proud of?
I can’t really say there’s been a best project, as most all of them are pretty damn great and I’m glad to have had the experience(s) each one provided.
I learn at least one new thing with every project I work on, so each holds significance in some way.
With that being said, I can say that my favorite art so far is definitely the piece for The Heart of Stone. I’m extremely happy with how that one turned out. 🙂
—
5) What kind of genres do you normally work in, and what’s your favourite?
Most of my work is through Ragnarok Publications, so I’m doing design (and some art) for fantasy, YA, urban fantasy, sci-fi, humor fantasy (James Walley’s The Forty First Wink—loved making that cover) titles. I’m all over the place! haha
Although my favorite genre is fantasy, I don’t have a favorite genre to work in. It really just depends on the book and what ideas it sprouts in the ol’ noggin—beauty can come from the most unlikely of places, so I’ll never dismiss anything just because of its genre.
—
6) Where do you get your inspiration from? Which artists or designers do you look up to?
As many creative people can attest to, inspiration comes in many forms and can hit you at any given moment. One thing I do a lot is take photos of things that spark even the slightest bit of inspiration—mostly those are book covers and movie posters. I like to look at book covers from other areas or from genres I don’t normally work in—there’s a lot to be learned there, of things to do, and more importantly, not to do.
As far as artists go, the ones I most enjoy are those whose styles stand apart from the crowd and draw you in, making you want more. Ones that instantly pop into my head are: Daniel Kamarudin, he has a broad range and a truly unique style; Tommy Arnold’s work always amazes me—it often times sparks inspiration immediately, and I take joy in seeing those signature geometric elements he puts into every piece; Marcela Bolivar’s work is purely gorgeous, every time, all day, every day—out of this world compositions that make you sit back and think…just, wow; Adrian Smith’s dark and twisted art is always a pleasure to see; Raymond Swanland is my all-time favorite—I’ve loved and followed his work since his Oddworld days, watching him progress to this instantly recognizable style he has today.
As for design, I really enjoy the covers produced from Angry Robot and Rebellion/Solaris. They clearly don’t follow the trends, just doing whatever they think looks cool and, well it usually always does.
I also enjoy a lot of covers Orbit puts out. There’s always a clean finish to it, but never anything just lazily slapped on.
—
7) In your opinion, what’s the key to a great book cover?
There has to be harmony between the art and design, whether we’re talking illustrated covers or fully designed covers. Harmony is key. Harmony is everything. Without it, a cover will fall apart… Now, not everyone will see that—a lot of readers don’t care or just don’t have a good eye, so you can still grab them with a disjointed cover. There are so many covers out there (traditional and indie) with amazing art, but it’s all ruined with bad or just lazy design. There should be equal amounts of attention paid to each—one element will falter without the other.
—
8) What draws your own eye to a good cover?
I’m a huge ‘judge a book by its cover’ type person, so I overlook a lot of books that just don’t do it for me visually—I’m probably missing out on some good stuff but, I just can’t…
First and foremost I’m a fantasy fan, so most of what I look for as a reader is fantasy. I like fantasy covers as they’re almost always going to have a cool illustration. Cool design coupled with that is a sure way for it to end up in my shopping cart, whether I want it or not. On the other hand, if there’s shitty design on a cool illustration, hmmmm, let’s wait and see if it ends up in the bargain section soon (I just got one of those the other day…).
As much as I love a good illustrated fantasy cover, I have to say my eye is mostly drawn to fully designed covers (no illustration). Whether it’s abstract, lightly photo-based (like you see on a lot of mystery/thriller covers), simplistic, or typography-focused I really love a good cover design.
—
9) In regards to you as a reader, what are you currently reading or planning to read?
First I have to say I’ve been doing pretty good on the reading list so far this year (way ahead on my Goodreads challenge!). That makes me happy, because I’m a slooow reader. I’ve read a few indie titles this year, most notably of which was Benjamin Descovich’s Dead Letter. It was different than what I’ve read in the past, but I enjoyed every second of it and look forward to what follows from him (I’ve already got Dragon Choir in the [long] queue). Currently, I’m at the beginning of Carcharadons: Red Tithe, by Robbie MacNiven. It’s a Warhammer 40,000 title that focuses on the badass Night Lords and the Space Sharks (whom I know nothing about). After that I will continue the Night Lords series (books 2 and 3 are awaiting) from Aaron Dembski-Bowden—I freakin’ love that series.
And sometime this year I’m really hoping to get to John Gwynne‘s The Faithful and the Fallen series—I’ve heard nothing but good things about it and, I splurged on signed editions so I need to bump those up the TBR list.
And of course any titles that come across the Ragnarok Publications table that piques my interest (which is, oh, all of them).

10) Where can we find out more about you?
People may peruse my portfolio site at stkkreations.com. There’s an easy-to-use inquiry form there for anyone interested in working with me.
In a more social and interacting sense I’m on Facebook, usually posting info about projects I’m working on, ‘behind-the-scenes’ shots of layouts or covers, random artwork, and the occasional random/weird post. I’m fairly easy to get along with, so anyone who feels inclined can look me up—I just ask that any work inquiries be initiated through email.
Twitter, I’m there too, though I usually only peek my head in, say "Yeeeaahhh I still don’t understand this place," and dip back out. Everything there is posted from my FB page—just there so no one will steal my name haha.
I’m also on Goodreads for anyone who cares about what I’m reading. I don’t frequent the groups right now, but I’m there…
—
Thanks Shawn!
I’ll be back soon with another video all about the story behind The Heart of Stone. Stay tuned.
Peace,
Ben