First In Series
Listen to a sample
$2.99Buy Now!Read A SampleAdd To Your GoodReadsSee The Full Series

Meet Caltro Basalt. He’s a master locksmith, a selfish bastard, and as of his first night in Araxes, stone cold dead.

They call it the City of Countless Souls, the colossal jewel of the Arctian Empire, and all it takes to be its ruler is to own more ghosts than any other. For in Araxes, the dead do not rest in peace in the afterlife, but live on as slaves for the rich.

While Caltro struggles to survive, those around him strive for the emperor’s throne in Araxes’ cutthroat game of power. The dead gods whisper from corpses, a soulstealer seeks to make a name for himself with the help of an ancient cult, a princess plots to purge the emperor from his armoured Sanctuary, and a murderer drags a body across the desert, intent on reaching Araxes no matter the cost.

Only one thing is certain in Araxes: death is just the beginning.

“I enjoyed this book immensely, there rarely ever being a moment when I felt ready to put it down before I finished it.”
– Diogo Capelo, Goodreads Reviewer

“Chasing Graves, with its well paced and tight plot is complex, intricate and rewarding. I can’t wait to put my hands on the sequel.”
– Lukasz P, Goodreads Reviewer

“To say that the concept of Chasing Graves is grimdark would be an understatement… The world building is fantastic and reminiscent of Michael Moorcock’s Elric series.”
– Grimdark Magazine

“Galley has created a fascinating world that feels rife with stories… its history is rich with detail and there’s so many avenues to be explored.”
– Adam Weller, Fantasy Book Review

“With detailed characters, a twisting plot, and a heavy dose of gory darkness, Ben Galley has once again produced a fantasy you can sink your teeth into.”
– The Grimmedian

“A great first book to a series I sincerely can’t wait to complete.”
– Novel Notions 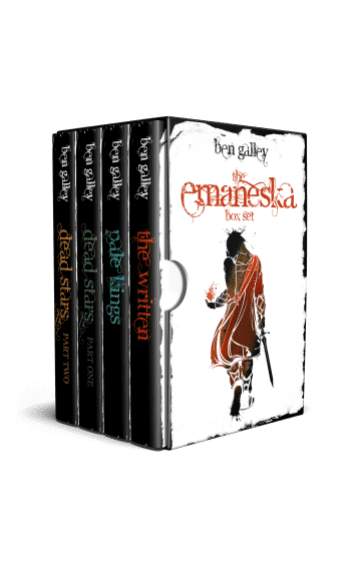 Listen To The Music

Listen to the music that inspired the book.