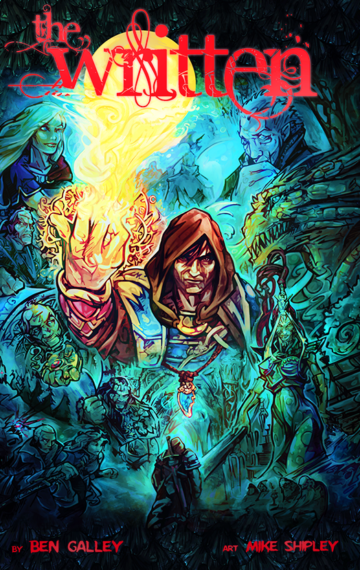 Adapted from the best-selling novel The Written by Ben Galley and crowdfunded by the great folks at Kickstarter, The Written Graphic Novel is finally here.

Epic, dark, and brutal right down to the very last pixel, this graphic novel tells the tale of Farden – Emaneska’s favourite mage – as he unravels a plot to bring the world to its knees. Just think Lord of The Rings meets Sin City, and you’ll be on the right track. With words by Ben Galley and art from Michael Shipley, it’s a roller-coaster of a graphic novel.

Something has gone missing from the libraries of Arfell. Something very old, and something very powerful. Five scholars are now dead, a country is once again on the brink of war, and the magick council is running out of time and options.

Entangled in a web of lies and politics and dragged halfway across icy Emaneska and back, Farden must unearth a secret even he doesn’t want to know, a secret that will shake the foundations of his world. Dragons, drugs, magick, death, and the deepest of betrayals await.